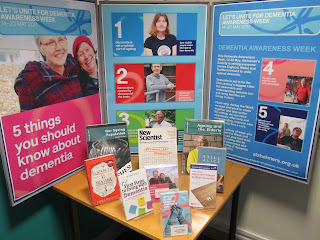 This year Dementia Awareness Week takes place from the 14 to 20 May 2017.  The Alzheimer's Society is asking everyone in England, Wales and Northern Ireland to unite against dementia.
Dementia is set to be the biggest 21st century killer.  However, awareness and understanding remains low and many families are facing it alone.

During the week, the Alzheimer's Society wants everyone to come together and take action.  By uniting everyone can raise awareness, offer help and understanding, improve care and urgently find a cure.

Come and take a look at the display in the LRC, as we raise awareness about dementia.  There are some free booklets and postcards available to take away published by the Alzheimer's Society, as well as some fiction and film tie-in books about people with dementia and books on dementia.  Further information and publications can be found on The Alzheimer's Society website.
﻿
Posted by LRC Blog at 09:32

NEW BOOKS IN THE LRC